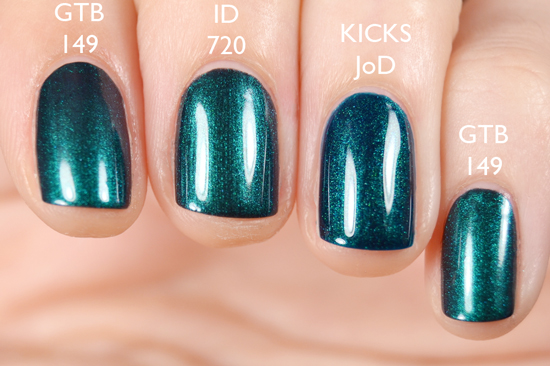 When it comes to application I found that Beetle Green is a lot heavier and a bit more pigmented, and if you are brave with the thickness of coats you could probably get away with only one coat, but I like them thin so two it was. Sea Bug is a bit on the sheerer side, needing two thick coats of three normal coats to reach full opacity.

Beetle Green does however end up a bit streaky, something neither Sea Bug nor Jewel of Denial does. The streaks doesn’t make the polish lose any of its depth, though, but when it comes to depth I must say I prefer Jewel of Denial. Price-wise I definitely prefer Sea Bug and can absolutely live with having to add an extra coat when it’s such a difference in price but not very drastic differences in application, longevity nor beauty.